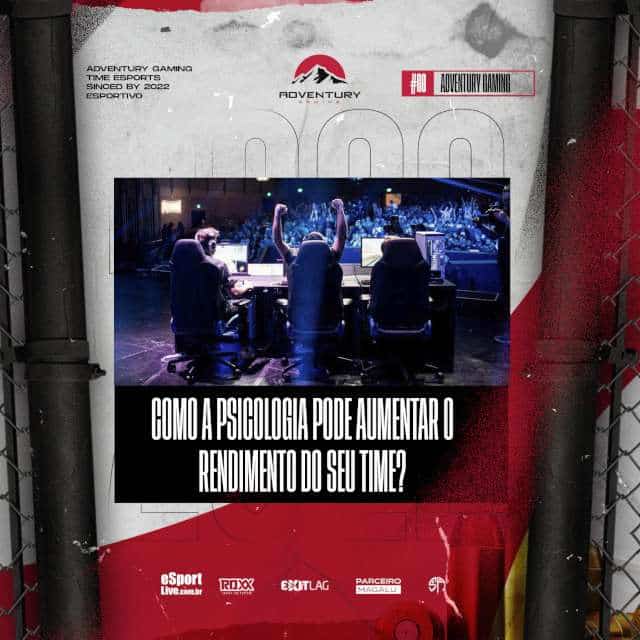 Every day, thousands of people around the world lose team matches. And usually people put the weight of their losses on the team. But you who are a team game lover, let me explain something to you.

Your team isn’t always bad, maybe they’re just missing some crucial details. And today, Adventury Gaming has separated a special theme for you to enjoy your matches with the team much more.

Sport psychology can solve many of your problems, so we’ve separated the following points for you to start working with your team right now.

Goals are what keep me going.

This sentence by Muhammad Ali will define very well what we are going to talk about next.

The goals, without a doubt, have relevance and importance within the routine not only of an athlete, but also of anyone. They have great power, keeping us firm to move forward, towards the results we have not yet achieved.

For sport and exercise psychology, goals can be divided into three types: a) outcome goals; b) performance goals; c) process goals.

The experience of enjoying a game or a competition, where it is clear that there was the union of the whole team to play, believe me, this is wonderful, in addition to bringing great results to the entire team.

So, working with group cohesion is paramount for many aspects of both the athlete’s life and the lives of ordinary people.

Did you realize that even if you are not a professional player, you can still use everything that has been said so far in your daily life? Look that! Keep up with us!

We can address basic types of cohesion: a) task cohesion, which refers to the degree to which group members work together to achieve common goals and objectives, and b) social cohesion, which reflects the interpersonal attraction between team members.

When we talk about leadership, many people soon think of bosses and people who carry a certain power within an institution or team. But when we look more deeply into a group, we realize that this is no guarantee that a boss really is a leader in that environment.

Leaders display a variety of personality traits. There are no specific traits that make you a successful leader.

Leadership is a very important factor to be identified, because it is through the identification of who is the leader of that group that it is possible to manage its development, so that it is towards victory.

Leadership is “the process by which an individual influences a group of individuals to achieve a common goal” (Northouse, 2010).

Note how leadership is related to goals. Developing goals and identifying the leader’s stance on them is of paramount importance for the group to remain engaged in development.

In a group, there are not only leaders who provide the development. There are also leaders who resist change, which can be harmful at certain times in the championship.

Identifying the roles that each athlete presents within the group is of great importance for the development and for group cohesion, and leadership is one of these possible roles to be worked on and identified.

Our society values success and victory at all levels of competition. Both coaches and athletes can feel the pressure to be winners. However, people who do not effectively deal with the pressure of competitive sport may experience a drop in their performance.

Competitive sports athletes need to learn to manage their activation. They should be able to increase it when they are feeling lethargic and decrease it when the pressure to win causes them anxiety and nervousness.